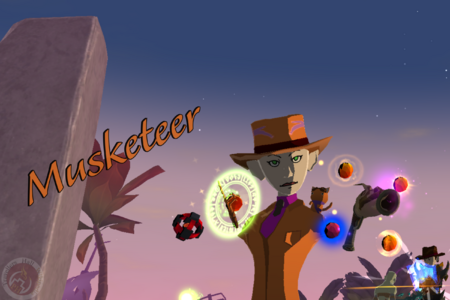 The musketeer can load a variety of orbs into his weapon to cause a wide array of useful effects. These effects can be amplified by "charging" the shot -- this is accomplished by holding the trigger button for a few seconds prior to firing the shot. You will know the shot is "charged" when the weapon's muzzle is glowing purple.

All orbs have a small area-of-effect (AOE). So, shooting the ground near a group of allies/enemies and/or shooting an ally/enemy in the middle of a tight grouping will affect all nearby targets. If you take the level 20 talent "Charged Orb", then your AOE radius is significantly increased when you shoot an enemy or your turret.

A large immediate heal. 12s cooldown. You can shoot your turret with this orb to amplify the turret's healing.

Buffs your target(s) with a heal-over-time (HOT). This orb has a short cooldown. You can shoot your turret with this orb to apply the renew buff to every target the turret shoots.

Blocks some incoming damage for a short time. Wears off rapidly. Has a medium cooldown. If you shoot your turret with this orb, all allies in a large radius will be shielded then your turret will be destroyed.

Removes one debuff from allied target(s). 4s cooldown. If you shoot your turret with this orb, the effect will have a larger radius and your turret will be destroyed.

Creates a large pool on the ground. Any ally inside the pool will receive HOT healing (as long as they continue to stand in the circle). Has a very long cooldown. If you shoot your turret with this orb, the closest dead ally will be resurrected. (Resurrect has a 20 minute cooldown and requires one reagent.)

Slows enemy target(s). If you shoot your turret with this orb, the effect has a larger radius and destroys your turret.

Pulls enemy target(s) toward the orb. If you shoot your turret with this orb, the effect has a larger radius and destroys your turret.

This orb effect cannot stack on a target. New shots override the old ones (even if you have more than one Musketeer in a group).

All musketeers have a turret. It is the small woven red ball attached to your chest. You can pick it up and throw it. It will stick in place after 2 seconds of being thrown. This allows you to place it high up in the air, near you, on the ground, or in mid-air between you and mobs. Placement matters!

The turret blocks ranged attacks from allies and enemies. So, you can hide behind your turret while caster enemies try to shoot you. It can also cause your allied scoundrel to miss all of his shots. Be mindful.

Due to the orbs having a small splash effect, shooting the ground at your feet can be used when the players you're trying to heal are grouped up tightly close to you (doing this can prevent having a player "body block" your orb).

Only do this under very specific circumstances:

TODO: what is the duration of the turret if you never destroy it with an orb?

TODO: how much healing/damage does it do if you never shoot it with an orb? I assume it is relative to the player's weapon damage - and is affected by intellect/strength buffs.

TODO: what is the % healing boost for normal and charged shots both direct to a target and into a turret? Do all targets receive equal healing or does the primary target get more?

Travellers Hall Discord
Retrieved from "https://wiki.thehall.xyz/w/index.php?title=Class_101_/_Healer_/_Musketeer&oldid=4373"
Category:
Cookies help us deliver our services. By using our services, you agree to our use of cookies.