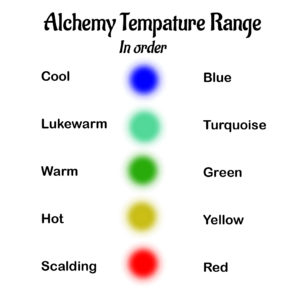 Here you can find pre-made tilesets put together by our experts.

Custom Tilesets Pre-Made for Your Class

I Want To Design My Own Tileset

That is awesome! To get you started, below is a list of the diffrent type of runes, what activates them and how to make them.

When making runes, remeber, you always dip the bottle (to finish) when the pot turns blue.

The following tiles are triggered when a specific type of attack hits you.

Here is how you do that: How to Make Tilesets

Artificing History: In the beginning

Artificing, which is the profession that has everything to do with rune tilesets, was introduced in the early test stages of OrbusVR.

The post about it can be found in the following link:

Travellers Hall Discord
Retrieved from "https://wiki.thehall.xyz/w/index.php?title=OrbusVR_/_Alchemy_101_/_Runes_/_Rune_Tile_Making&oldid=5397"
Category:
Cookies help us deliver our services. By using our services, you agree to our use of cookies.